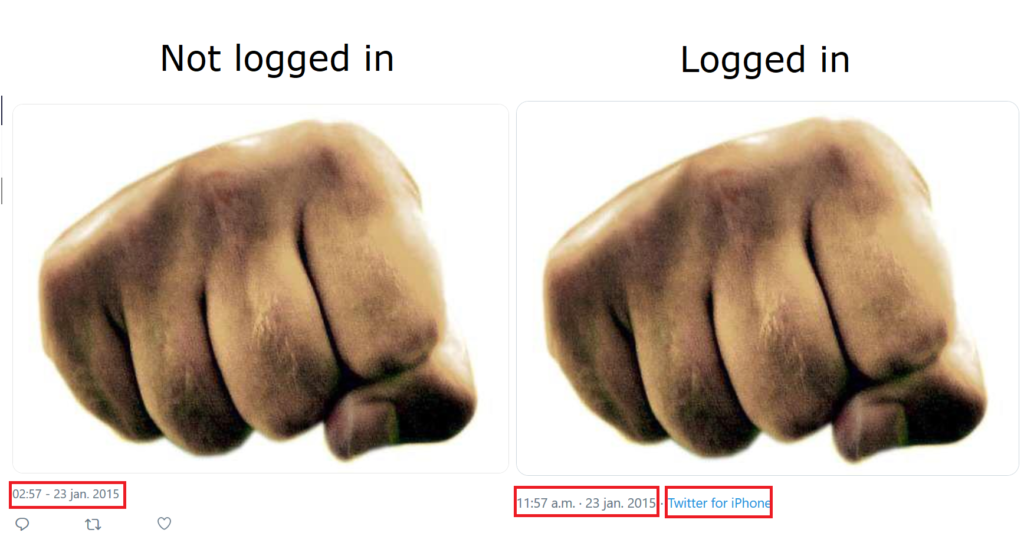 For some investigations it may be important to find out the exact time of a post on Twitter. For example, think of a situation in which you are asked to find out when exactly a threat on Twitter has been sent or what the exact order of user responses on this Tweet is. Or you may also be asked to investigate when a user is usually active. For example, to determine when a user is likely to be asleep, in the event that a raid is planned and it should proceed smoothly.

Is the time you see actually correct?

If you often look at the exact times of Tweets that have have been posted on Twitter, you may have noticed that the times are not always the same. It makes a big difference whether or not you are logged in, and with which account and on which laptop you have done that. As a researcher or investigator, you want to be sure of your case. If you make a mistake, you may not only be embarrassed, but your mistake can also have serious consequences for your investigation. In this blog post we therefore explain how you can find out the exact times of Tweets, Retweets and comments on Twitter.

Metadata in your investigation

Metadata is embedded in a lot of data, which can be useful for you as an investigator. After all, you not only have the “normal” data in your hands, but also the data that says something about this data. And this data sometimes contains more information than you think. For example, photos taken with digital cameras may even contain data, times and GPS coordinates. This allows you to find out very precisely on what date, at what time and at what place a photo was taken. Metadata from images made with digital cameras is what you call EXIF data, which stands for “Exchangeable Image File“. Read more about this in our earlier blog post.

After reading the above, you may think of locating GPS coordinates from photos posted on Twitter. Unfortunately we have to disappoint you, because this does not work. Large websites and social media such as Facebook, Twitter and LinkedIn remove this type of information after uploading. For you, that means that you can no longer extract this information from a photo. Sometimes you have more luck with smaller websites or social media. In any case, trying doesn’t hurt.

Fortunately, you can map on Twitter when a message or comment has been posted. And sometimes even from which location that has been. In this blog post we focus on mapping the dates and times of messages (“Tweets“) on Twitter. And that can be more difficult than you think.

In the image below you see the same Tweet with an image twice. The left image shows us how the time looks when we are not logged in, the right image show us the time when we are logged in. Both images show the date January 23, 2015, but there is a difference at the time: the left image indicates 02:57, the right image 11:57 a.m.. Which of the two times is correct? And why are there differences?

Find out the correct time

In order to find the correct time, you must search for the Unix timestamp of the relevant message. The “Unix timestamp” is a time stamp from the Unixtime which is also called the “Epoch time.“”. Without going into the Unix time much deeper, the Unix time is a kind of system that indicates a specific moment in time. Because these moments in time are the same worldwide according to this system, Unix timestamps are widely used in computer systems. If you know the “Unix timestamp”, you can convert this timestamp to the time in your local time zone.

The first thing to do is move your mouse over the time of a message. If you do this, you will immediately see that a date is displayed. The time differs again, because the left image (not logged in) shows the time 02:57 while the right image shows 11:57. Then right-click on the time and then click on Inspect Element. 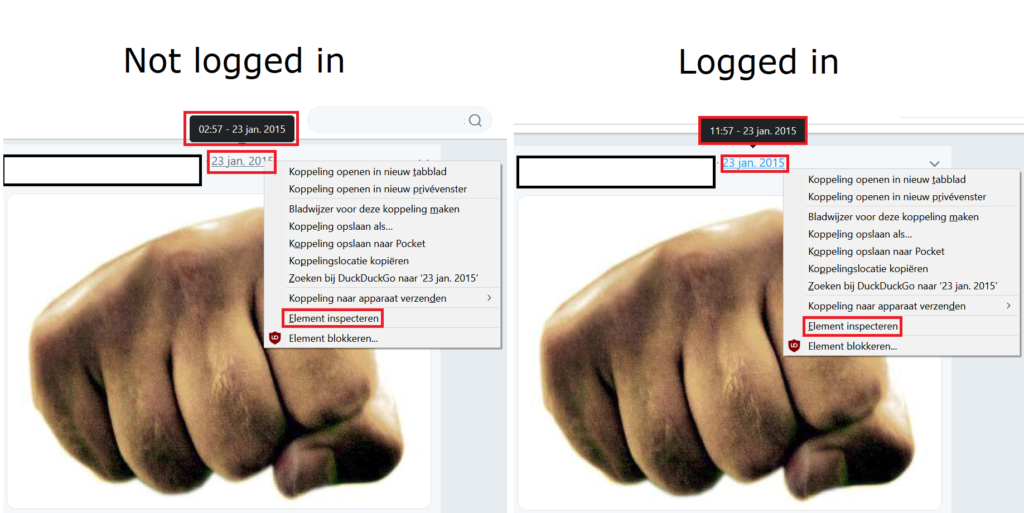 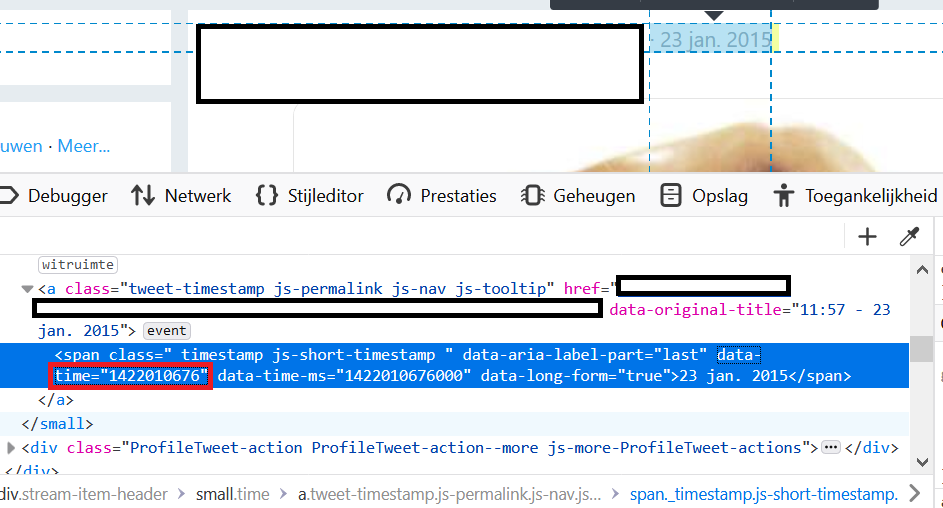 You can also convert the Unix timestamp to a “real” time via the Epochconverterwebsite. As you can see below, the Unix timestamp 1422010676 is converted to 10:57:56 GMT. This time is exactly the same as the time that WolframAlpha indicated.

What does this mean?

Both the tool on the WolframAlpha website and the tool on the Epochconverter website make the Unix timestamp 1422010676 the time 10:57:56. WolframAlpha calls this time in UTC, which stands for “Coordinated Universal Time” and Epochconverter calls this time in GMT, which stands for “Greenwich Mean Time“. Although both mention the same time, UTC and GMT do differ from each other. GMT is a time zone while UTC is not a time zone but a so called time standard. Both time formats never change, even when the clock is set forwards (“summer time”) or backwards (“winter time”).

If we want to read the time of 10:57:56 GMT / UTC in our local time zone, we must therefore take the summer and winter time into account. In addition, we must also take into account the time zone in which the Netherlands is located. The Netherlands is located the CET time zone, which stands for “Central European Time“. This time zone is 1 hour ahead of the UTC as standard, and an additional hour in the summer. Because the message was posted on January 23, 2015, we must therefore take winter time into account. That means that the message, converted to our local time zone, is posted at 11:57:56 (10:57:56 + 1 hour).

We have seen above that Twitter records the time as 02:57 if you are not logged in, and that the same message gets 11:57 a.m. if you are logged in. Why doesn’t Twitter automatically convert this time to your local time zone? A possible answer to this may be that each Twitter account has its own time settings. In our Twitter account, for example, the time zone is set to the GMT + 01: 00 (Amsterdam) time zone, which shows us the 11:57 time when we view the message. 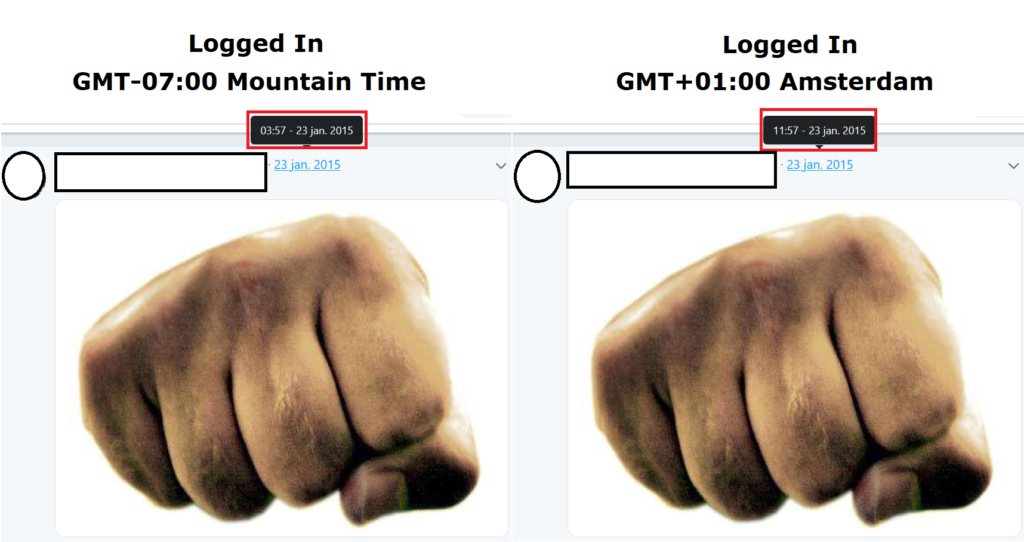 Do you want to be sure?

Do you want to be sure that you have the correct time for a message, retweet or comment? Then make sure you find out the timestamp and that you convert this timestamp to your local time zone, taking into account the time of the year (summer time and winter time). It does not matter whether you are logged in or not, because the timestamp is always the same. If you are logged in, it is always good to know from your Twitter account which time zone it is set to. You can see this in the old version of Twitter (use the Add-on GoodTwitter) via Settings and privacy > Account > Time zone.

Do you want to know more about conducting research on Twitter? Or do you have an addition to this article? Then contact us! In our OSINT classess we will of course have a look at Twitter investigations.